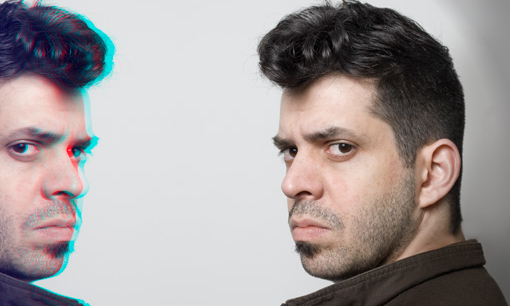 Fritz von Runte is a DJ and Producer based in Manchester, England. Beginning his DJ career in Rio de Janeiro, he is most known for his work remixing other artists, particularly with work such as The Beatles Hell and The Beatles Hate, Lily AllenRemixed (reputed to be the most downloaded album in the UK) and more recently Bowie 2001, which incorporates samples from Stanley Kubrick’s 2001 in the remixing of David Bowie’s catalogue. He released a remix EP for the legendary three bassist supergroup Freebass entitled Fritz von Runte – Freebass Redesign. He is also known for a series of mashups entitled Lycantropii, begun in 2003. He works with the American music label 24 Hour Service Station, and releases his own material under the anti-war non-profit label Marshall Records.
Fritz von Runte’s life has always been connected to music, one way or another. His father was a obsessive record collector, Jazz, Big Bands and Orchestras. He gave Fritz his first record player, a monophonic portable one, at the age of 4! As a boy, Fritz was always the one responsible for directing the music in parties. He didn’t have a video game, never got into sports, basically was more interested in music than anything else. At the age of 15 he became a professional DJ, warming up parties in warehouses for thousands of people. When he was 18 he bought his first drum machine and one year later got a job in a studio, when he began to produce music. When Fritz was 20 years old, he founded Shalalá Records, an independent record label specialised in electronic music. That was 1996 and the Shalalá catalogue so far has reached over 80 releases. His work as a DJ was also very successful and prolific – Fritz even played Ibiza (that was when it actually meant something).

In 2003 Fritz founded Marshall Records, another independent label, with an explicit agenda: making records against the war, that was then commencing with the Iraq invasion. Marshall Records focuses on bootleg mixes and mash-ups, and its catalogue has achieved over 25 million downloads – most of it propelled by the internet phenomena The Beatles HATE.  Fritz continues to produce remixes, original music as well as he DJs from time to time.

(2010) Fritz von Runte vs Freebass – Redesign (digital EP – Also included on the US pressing of the Freebass LP, It’s A Beautiful Life)