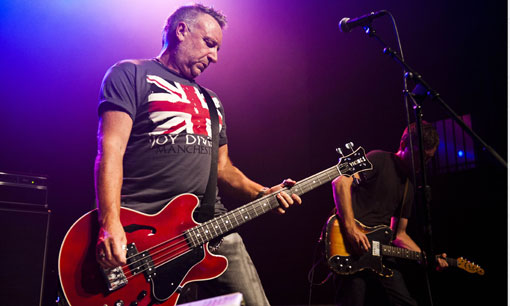 Peter Hook And The Light features Peter Hook on vocals and bass, Jack Bates on bass, Nat Wason on guitar, Andy Poole on keyboards and Paul Kehoe on drums. Rowetta performs as guest vocalist at selected gigs. Having performed together at the opening night of The Factory in February 2010, in the past twelve months The Light have undertaken extensive tours of mainland Europe, Australia and New Zealand, and The United States, as well as numerous UK and international festival appearances. Following their well received Closer live appearances across the United States in September 2011, their second American tour and their debut visits to Canada and Mexico the same month, The Light continue with live dates across Europe to the end of 2011 and have just announced a return tour of Australia for April 2012.

Following its digital release in May 2011, Peter Hook And The Light’s debut EP “1102 / 2011” is to receive a physical CD release with American indie label 24 Hour Service Station as an extended edition including instrumentals and two unreleased a capellas of Rowetta’s treatment of Atmosphere.

Reissued with ten tracks across the CD, and in a jewel box sleeve which features James Chadderton’s highly acclaimed, visually stunning cover.

The 1102 / 2011 EP takes its name from the palindromic recording date of 11th February 2011 at Blueprint Studio, Salford and features the four tracks from the EP, Rowetta’s versions of “Atmosphere”, “New Dawn Fades” and “Insight” while Peter Hook sings on “Pictures In My Mind”.
“Pictures In My Mind” was an unfinished Joy Division track which was unearthed by the band’s “bootleg society” from a rehearsal tape stolen in 1977, setting it between Warsaw and Unknown Pleasures. The effervescent and punky tune has been completed for the first time by Hooky And The Light for the release.

After performing with the band consistently since 2007 at events such as Versus Cancer, 1234 Festival, Vintage and The Factory gigs , The Light’s guest vocalist Rowetta sings three of the classic Joy Division tracks which she has been singing live with the band over the past year, “Insight, “New Dawn Fades” and “Atmosphere”, delivering intensely passionate performances across all three tracks.

Having received great reviews for her vocal performances from Joy Division fans, Factory aficionados and her own fan base, Hooky decided to record Rowetta’s unique renditions of these tracks, and she joined the band at Blueprint to lay down the vocals in February 2011. Videos for both “Pictures In My Mind” and “Atmosphere” can be viewed on the Peter Hook And The Light YouTube channel, along with footage from other The Light concerts including vocal performances from Perry Farrell of Jane’s Addiction and electronica wunderkind Moby.

The design for the EP is a stunning post apocalyptic Manchester streetscape by local Manc artist James Chadderton who works as a tutor in the city in 3D and Graphic design. Inspired by the nightmarish futuristic visions of movies like The Terminator, Dawn Of The Dead, and the BBC’s classic “Threads” series, many assume that James’s artwork depict post nuclear fallout but James prefers to characterise them as “human devoid wastelands where the buildings have been left to decay. For more details on James’ work check http://www.avonius.com/.

“Pictures In My Mind’ is a worthy addition to the Joy Division canon.” – Mark Radcliffe, Bbc Radio 6 Music

“Very effective and if anyone’s going to do a Joy Division song it might as well be someone who was in them… that song (Pictures In My Mind), the unfinished Joy Division song I actually really like. It sounds like The Seeds or something from the Sixties” –  David Quantick on Steve Lamacq’s Roundtable

(On Atmosphere)…Rowetta brings a new serenity and grace to a stunningly beautiful song many might have thought uncoverable.” – Dave Simpson, The Guardian

Hacienda Records is the official label of legendary Fac 51 The Haçienda is based exclusively at its website, fac51thehacienda.com, and has worked closely with American indie label 24 Hour Service Station on the physical releases from Freebass, Man Ray and now The Light.  Originally formed as a an outlet for the work of original club owner and Joy Division and New Order bassist Peter Hook, Haçienda Records has always intended to publish other artists, both new and established, to provide a platform for exposure in the industry.  Artist and EP’s release by Haçienda Records aside from The Light’s “1102 / 2011” EP include humanizer’ debut EP “This Tiny Universe” and the first release from Canadian Techno prodigy Richie G, his “Baum” EP which featured remixes from Hernan Cattaneo & Soundexile and Jesper Dahlback. Old friends Section 25 brought out their first EP of brand new material “Invicta” since the passing of Larry Cassidy in Autumn 2011 which also saw Jon Dasilva’s The Virgo Mechanically Replayed “Factory Fatigue” album finally released. Following the release of The Light’s EP, 2012 will see the debut EP from the hotly tipped Super White Assassin and In Formation.

6. Pictures In My Mind (Instrumental Mix)