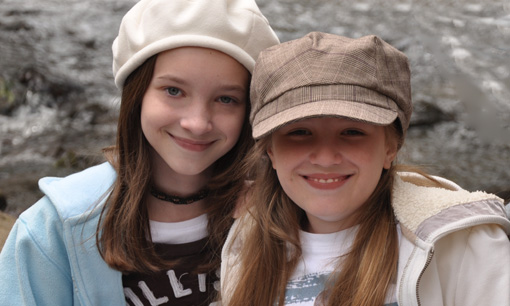 Brianna and Skylar Ward, sisters & young musicians from Tampa, Florida, with guidance from their uncle, bassist Jason Hamar (Spork / Flat Stanley), formed Yes But No in 2009. Their first recording was the title track for Ceremony – A New Order Tribute, a charity album that benefits talented young people with grants for music lessons. The sisters were asked to contribute a song to represent children who have had the opportunity of music in their life. Their version of “Ceremony” opens the album after a spoken word dedication to Tony Wilson, Factory Records maestro & head of New Order’s record label, from legendary New Order & Joy Division bassist Peter Hook. A remix of their track by Kites With Lights closes out the double CD collection.

Brianna (13) and Skylar (10) began taking guitar lessons in 2005 when after 7 years of competitive dance, they decided a change of the Arts would be exciting. The sisters have also dabbled in modeling & acting. You can find them in the upcoming movie “Adventure Scouts Honor” to be released May of 2010.

Salford Star:
“Yes But No, fronted by two sisters age 10 and 13, do a well credible cover of Ceremony, which mixes their sniding at the back of the school choir voices with some serious geetar sniping at the front. If that’s them playing, be scared…be very scared!”

Popshifter: Joy Division’s Grandkids
“Perhaps the best—and most surprising—track from the album is Yes But No’s rendition of 1981’s “Ceremony.” The song retains the electric, hypnotic quality of the original while utilizing gorgeous, high, pure vocals. The most interesting fact about Yes But No is that they’re aged 13 and 10. I find it fantastic that the Factory legacy has stretched itself to music fans that young. It also seems appropriate, because the CD benefits The Salford Foundation, Manchester, UK (which provides grants and assistance to young people in creative ventures).”

Goatsden
“the moody dance-pop of New Order’s classics emerge fresh and re-imagined here, with a selection that balances comfortably between indie rock and club techno (both of which New Order pioneered back in the early 80’s). Standouts include Yes But No (consisting of 10-and-13-year old sisters Brianna and Skylar Ward) and their splendid and faithful version of the resonant “Ceremony”

Lucky Dog Radio:
“A new tribute collection for New Order has been released that features a group of artists playing their music, and the one that caught my ear was a version “Ceremony” by a band called Yes But No. I like the sound of this, and was particularly impressed when I learned that Yes But No is actually the Ward sisters: Brianna, age 13 and Skylar, age 10, who both play the guitar and are accompanied by their Uncle Jason on bass.”