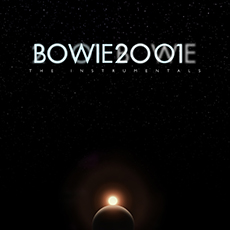 David Bowie’s songs meet Stanley Kubrick’s 2001 A Space Odyssey in a mixpiece of Sound and Vision from Manchester producer Fritz von Runte. Vocal versions of these tracks as The Remix CD, The Mixpiece CD & The Movie DVD are at www.Bowie2001.com

Bowie 2001 – A Space Oddity comprises a remix CD, with 15 new versions of classic Bowie tracks like “Heroes”, “Let’s Dance” and “Ziggy Stardust”, a 100 minute mixpiece with all these new versions mixed together continuously, and also a movie, synchronizing this mixpiece to a re-edited version of Kubrick’s masterpiece 2001: A Space Odyssey. Bowie 2001 is a non-linear existential gothic drama hyper-cycle, a divine odyssey about the creation of the cosmos. Starman telling the story of starchild. Ziggy covered in moon-dust geysering into the vacuum of space. The Thin White Duke’s pursuit of a wide black monolith. Major Tom killing Nathan Adler’s electro-mechanical reincarnation as HAL 9000. From the Dawn of Supermen to Life in Mars and Beyond the Infinite, astronaut Dr. Dave Bowie tells the story of the universe with a supersonic musical piece synchronized with a intergalactic film, producing the transcendent experience known as Bowie 2001; a mixtape, a movie, and also a remix album.

Fritz is no stranger to online releases. Lily Allen Remixed, von Runte’s 2009 album, was the most downloaded remix album in the UK in 2009. The Beatles Hate, another project produced by von Runte was a worldwide frenzy back in 2006, released simultaneously as the Cirque du Soleil’s soundtrack The Beatles Love. Lately, Fritz has been producing and remixing local Mancunian bands 808 State, The Sisters of Transistors and Peter Hook’s Freebass – for who he produced 4 tracks on their debut album which was recently released in America. David Bowie’s music has been rediscovered over the past few years. His classic album Station to Station has been re-released in a deluxe remastered edition backed with live recordings from the era and all sorts of memorabilia. At the same time, 2001: A Space Odyssey, Bowie’s main influence on the writing of his seminal track “Space Oddity”, has had 17 minutes of additional footage recently discovered in pristine condition. Also, Douglas Trumbull, 2001’s special effects supervisor, is releasing a comprehensive documentary this year about the masterpiece.

Fritz thinks that connecting Bowie with 2001 is long due. “Bowie, 2001, as well as NASA and the whole space age culture have always been a huge influence on me” von Runte says. The Remix CD, The Mixpiece and The Movie are available now at www.Bowie2001.com with edited versions for download. A limited edition CD with bonus tracks and a DVD of the movie are also available.