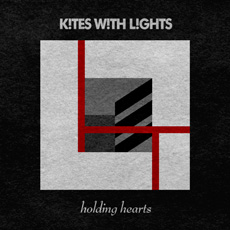 Jonah Cordy’s Kites With Lights project has been keeping him busy since its inception in 2005, with a string of singles and albums as well as his remixing and production work. The Pittsburgh musician may specialize in electronica, but he’s more than happy to delve into other genres and create musical mongrels such as new single ‘Holding Hearts’, a track that’s set for release on July 30th and will also be appearing on his forthcoming new EP.

With electronic beats and fiercely bubbling, Moroder-esque synths as its foundation, Kites With Lights add plenty more sounds to create this hybrid. There’s a deep, throbbing bass which is offset by twinkling chimes and an occasional string-section. Also the soft vocals help to lighten the song, meaning it straddles noise-pop and dreampop at the same time, all whilst being essentially a modern electro number. It shows that Jonah Cordy isn’t short of ideas and that his experience is helping him craft some unique sounds.