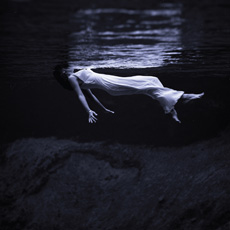 There is a sense of urgency in the record “Whispering Sin”. A convincing feeling that you get after the first listen that makes one believe that singer Shawn Kyle Beauville lives and dies with every note of the band’s music. That abandonment spills over from the very first track of this first full length record from American indie touring group the Beauvilles, an album of 12 songs that suggests the terms ‘indie’ and ‘epic’ are not mutually exclusive.

The songs speak in verse and free association about travel and tragedy, mad love and violent excess, lust and late nights in between the sheets. Echoes of dead 70’s icons as well as being completely unreserved, alive and unapologetic is what makes Whispering Sin best described as simply: ‘new Rock and Roll music’. Recorded with old road worn instruments and vintage tube equipment in makeshift studio setups between the band’s van tours of the underground club circuits and back alley stages of America from 2006-2008, it is a rare chance to hear young men on the end of their means leaving everything on the table, and in the recording itself.

1. Broad Sigh Dead
“This song was originally written years ago about Tony, a close friend of mine who was driving to his lover’s house without headlights on and went through a flashing red light. He and I had been fighting our ways out of the inner city and being poor and angry since being kids and we both knew that we were going to get out and away and escape. I just didn’t realize that he would escape first by being dead. Live, at shows, I still get furiously angry about all that bad luck to one of the best people I have ever know every time I sing the song.”

2. Coming Apart
“I was in Paris, France and there was this ballroom dancer that I had been in and out of love with and she had this lovely angora sweater that kept leaving lose thread everywhere in the hotel and I realized at that moment that we were doomed. The song had already been written and I wasn’t sure what it was about, and then and there I knew. It has gang vocals of a half dozen people singing and screaming the ‘COMING APART’ on it.”

3. Lips (Fourteens)
“(Drummer) Craig and I thought we were really clever for putting this song together to make a count of 14, and it not sounding like math rock. The lyrics are about the time that the record was being recorded, when this band’s vices almost killed all the members one by one eventually putting one of us in the hospital, but it always seemed like a good idea at the time, because we seemed sure that we all knew what we were doing.”

4. Tropic of Cancer
“Everyone should go out and read Henry Miller. That is all.”

5. Prom Dress
“At one point I was playing in the streets and I knew that the music was better than the spare change I was getting, and that my friends were very far out in left field, and young and gone. The song is heavily influenced by New Orleans music and Roy Orbison.”

6. The Revival
“This and many of the songs on this album were being recorded in a 1920’s flop house that I was living in, that had holes in the roof where the rain poured in, and cedar shakes, but was huge and abandoned, and basically had become our recording studio with piles of vintage tube amp gear in there. One night I was pretty out of my mind, and different musicians and band members had shown up, and I had the microphones hooked up through guitar parts and things that shouldn’t have been and I was getting broadcast radio frequencies from god knows where. I probably sang this song a hundred times that night, and then our old guitarist and I got into it and he threw me through one of the walls in the house when I was repeating, yelling at him again and again “What does it all mean?!?!?”. Now that house is waiting to be demolished. Good.”

7. Last Hymn of the Gloriously Beat
“I wrote and recorded this in less than 4 hours on a variety of inspiring motivators. The main guitar and vocal tracks were done live as I was writing the song on the spot while the microphones were recording.”

8. Sing For Us
“This is the closest I think that we will ever come to the beginning of a ‘concept’ song. It is about travel before planes and trains and written in the Hungarian Minor, and the chord forms are based of 1920’s French-Gypsy folk songs, but turned up really really loud through fuzz boxes and put into 5/4 time and then shoved into 6/4 time. The words are about conjuring up the forgotten. But whatever, I think that it is great stoner rock.”

9. Bougainvillea
“The street close to where the derelict abandoned house I was living in recording at was called Bougainvillea, and there were many of these beautiful thorny fuchsia bushes everywhere, in the middle of suitcase city on the wrong side of the tracks. A lot of illegal activities were going on outside the front door every day, including holidays. Temptation is everywhere. This song was re-written and recorded in two days to make it on the record. ”

10. Snow
“I was working on a psych-folk solo recording and was listening to songs like ‘She’s Like a Rainbow’ by the Brian Jones era Stones again and again and again. I got flown to do a solo show in Minneapolis, Minnesota where I hung out with Joey Molland from Badfinger and was shown around town by a voluptuous model who was the muse for a famous sculptor. She had a Russian accent and worked at the bronze foundry at the college and at one point took me out on thin ice on a lake to tempt fate for both of us. A week later I was in Miami, Florida, and had the lyrics to the song, and was so bitter about everything that I made it into a guitar smashing rock and roll song with the band. I never saw her again, and I doubt that she knows there is a song on college radio about her.”

11. Pretty in Pale
“This song was originally called ‘Pretty in Jail’ about a girl that loved many of my friends and kept getting into trouble the second she turned 18. One of my friends was madly in love with her, and I told him she would wind up dead as a doornail, to which he replied that he would keep loving her anyway. I re wrote the song imagining (and personally knowing) what it is like to have loved someone who is no longer alive. ”

12. Whispering Sin
“Sometimes the city you live in is like a person, like the dealer, like your lover, like the thief in the night. It is a siren song to come out, to go out, to not sleep, to say yes to everything. There are many cities like this in the world that I have been in and danced and sang, and even though we may sleep while in them, the city itself is always awake and wanting. This song was recorded live, the version on the record is the first take.”

The Smiths Tribute – Hand In Glove ›